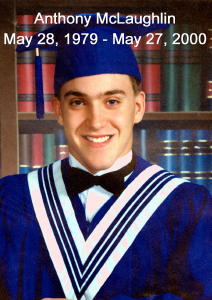 Winnipeg – WINNIPEG – The father of a man who was beaten to death in Winnipeg has filed a class-action lawsuit against the federal government on behalf of all victims of crime.
Jack McLaughlin’s 20-year-old son, Anthony, was killed after getting into a bar fight in Winnipeg almost five years ago. The killer was sentenced to two years less a day in jail, but served less than six months.
McLaughlin said the federal government spends millions on prisons and programs for criminals, but virtually ignores their victims. He said victims of crime deserve compensation for the justice system’s failures.
“What we’re trying to do to the government is say, ‘Look. You either start keeping these people in jail for reasonable times so that they’re not reoffending, or if they’re deemed [likely] to reoffend, why are you letting them out? And if you choose to let them out, then you have to be as accountable as anybody else,'” he said.
“All they ever talk about is how much they have to spend on jails. But what they don’t talk about is how much it really costs society as a whole. We have a lot more victims out there than we do criminals.”
McLaughlin, who is working with a team of Winnipeg lawyers, said his suit has the potential to become the largest class-action lawsuit in Canadian history. He said every victim of crime will be able to sign on to seek compensation.
It’s now up to the federal government to respond to McLaughlin’s statement of claim. A spokesperson for the Justice Minister would not comment, saying it’s not appropriate to discuss any issue that’s before the courts.