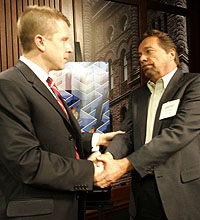 Adds insult to injury
Ontario Ombudsman Andre Marin has stripped away the bureaucratic curtains of the Criminal Injuries Compensation Board (CICB) to reveal a heartless system he says violates victims’ legal rights and leaves them further traumatized.
The provincial watchdog’s report — Adding Insult To Injury — says the ministry of the attorney general is breaking its own law in its efforts to curb CICB payouts to crime victims.
“The Criminal Injuries Compensation Board has been for the last decade government’s dirty little secret,” Marin said yesterday. “It’s not been doing its job; it’s put victims through the wringer.”
The agency is mandated by law to provide compensation to victims of violent crime and their families, but only 2.5% of claimants get any funds.
London, Ont., parent Aurelio Almeida, whose 5-year-old daughter Naiomi was raped and murdered in 2001, was challenged by the CICB to explain what his injuries were.
“My son and I still suffer each day, and they ask me, they say how are you a victim,” Almeida said yesterday. “My 5-year-old daughter was just raped and murdered and yet how am I a victim … they said if my daughter would have survived, we would have been granted more money.”
The mother of a woman who was decapitated had to provide a form in which a medical practitioner had drawn the location of the injuries on a diagram of a body.
Marin said the stalling and nitpicking was a deliberate attempt by the agency over the last decade to discourage claimants and stay within its budget as required by the ministry of the attorney general.
Attorney General Michael Bryant said he accepts the findings of the ombudsman

Crime victim advocates were hoping Ontario Ombudsman Andre Marin will recommend a complete overhaul of the Criminal Injuries Compensation Board when results of his investigation into the agency are released today.
Joe Wamback, who founded the Canadian Crime Victims Foundation after his son Jonathan was beaten into a coma, called the CICB the worst program of its kind in the country.
“The Criminal Injuries Compensation Board is the darkest spot on the road map of victims services in this province,” Wamback said. “It is confrontational and they treat crime victims as if, in fact, they were the criminals.”
The CICB was set up to provide financial support and assistance to victims of violent crime. Marin launched a special investigation into the public agency last August in response to numerous complaints from crime victims.
“Some allege they were treated shabbily by this agency, that they felt as if they were ripping off the system and they were crooks,” Marin said at the time. “Delays are a huge issue, according to complainants to our office. Delays that are measured not in days or weeks, but in months and years.”
Wamback dropped his own CICB claim in 2002 after four years of inaction.
If a killer is beaten in prison, he has a right to have his compensation claim dealt with within 60 days, he said.
Victims can wait years to see a claim settled and are lucky to get enough money to cover the funeral of their loved one, he said.
Wamback said his foundation raised $20,000 to provide a scholarship to Ryan Mahaffy, whose sister Leslie was killed by Paul Bernardo and Karla Homolka.
Muise said the CICB requires victims retell their stories, fill out complex forms and then wait sometimes years for the conclusion of any related criminal trial.
“If a principal caregiver is murdered, (the family) almost always takes significant financial hit; families end up splitting up. The (CICB) should be like a beacon of light.”