CCVF sends condolences to the family of slain Police Officer 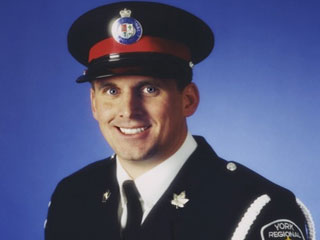 He was trying to stop a ring that specialized in stealing airbags. That effort cost a York Region police officer his life Thursday, as cops in the area north of Toronto tried to break up a group of thieves that stole not only automobiles, but the life saving devices located inside them. Cst. Robert Plunkett was among several undercover officers watching two men in two separate cars as they allegedly attempted to make off with the inflatable gear from an address in Toronto just before dawn. When the two Hondas, one gold, the other white, were spotted in Markham on Ascot Cres. in the Birchmount and Steeles area, officers moved in.

Plunkett was rushed to Scarborough General Hospital but doctors couldn’t save him. Other officers learned of the unfolding tragedy when an area resident phoned in a report of ‘two loud bangs’ in the street around 6am. When that unidentified caller peeked out his window, he saw a person lying on a lawn across the street. And by the time an ambulance arrived, he recalls hearing cries of “he’s bleeding, he’s bleeding!” coming from the scene.

Cops have charged two Toronto men, 19-year-old Nadim Jiwa and 23-year-old Basir Mohammed Yousafzai in the crime, but for now they’re not accusing either man of homicide.

Jiwa is facing manslaughter accusations, while the elder man is looking at a variety of other charges, including breach of recognizance and possession of stolen property. Cops admit it’s possible and even likely that the charges will be upgraded as the investigation continues. Both were in a Newmarket courtroom on Thursday and are being held in custody.

Flags at police stations across the GTA are being lowered to half mast, where they’ll stay until the officer’s funeral. Plunkett was a 22-year veteran of the force and was a member of the Special Services Unit. He leaves a family and many friends behind.