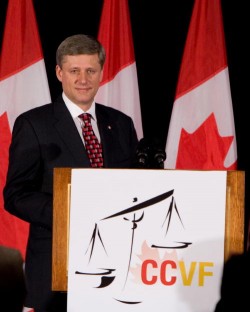 Prime Minister Stephen Harper today outlined the government’s achievements and objectives in reforming Canada’s criminal justice system in a speech to the 6th Annual Gala and Fundraiser for the Canadian Crime Victim Foundation. The Prime Minister said the reforms are replacing a decades-old system that has coddled criminals and made Canadian communities less safe with a system that serves the interests of law-abiding citizens.

“Our government’s approach to criminal justice is fundamentally different from our predecessors’. We believe the central purpose of a criminal justice system is not the welfare of the criminal, but the protection of law-abiding citizens and their property,” said Prime Minister Harper.

The Prime Minister used the opportunity to discuss four outstanding anti-crime bills, which, if passed, would build upon the government’s achievements including the Tackling Violent Crime Act and putting an end to conditional sentences for serious violent offenders. The legislation proposes:

Mandatory sentences for serious drug offences including those committed for the benefit of organized crime and those involving the use or threat of violence;

Measures aimed at organized auto theft rings making it a crime to alter, destroy, or remove a vehicle identification number, and knowingly, sell, give, transfer, transport, send or deliver goods that have been acquired criminally; and,

Amendments to the Youth Criminal Justice Act making it easier to detain young offenders who pose a risk to public safety.

“Our government has no intention of allowing young criminals to avoid punishment and evade responsibility. Anyone who presents a serious threat to public safety should be held fully accountable for their actions,” said Prime Minister Harper.

Established in 2007, the Canadian Crime Victim Foundation provides a powerful national voice for Canadian men, women, and children who fall victim to crime. Founded by Joe and Lozanne Wamback after their son was the victim of a brutal, near-fatal assault, the organization promotes laws, policies, and programs that support and assist victims of crime.