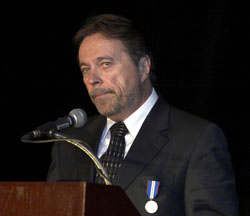 January 28, 2010. Today, the Canadian Crime Victim
Foundation (CCVF) applauded the recent announcement from the Hon.
Rob Nicholson, Minister of Justice and Attorney General of Canada,
who announced proposals to strengthen the way the young offenders
system deals with violent and repeat young offenders.
The new proposals include requiring courts to consider adult sentences
for young offenders convicted of serious crimes, when circumstances
require it.
“This is a move in the right direction,” stated Joe Wamback, Chair of
CCVF. “For 20 years, we’ve seen the Young Offenders’ policy become
increasingly more lenient and forgiving, as the violent youth crime rate
continues to escalate.”
CCVF is urging the Federal government and Members of Parliament to
begin listening to those most affected by violent crimes and start to
place greater weight on the protection of Canadian children from
violent abusers, regardless of their age.
“It is time to listen to concerned Canadians who have suffered the
greatest. We will not cease putting pressure on MP’s of all political
parties emphasizing the protection of innocent young people, while
creating greater accountability and rehabilitative efforts for those
offenders who harm and take innocent lives,” concluded Wamback.
For more information and to obtain a confidential list of parents who
have been directly affected by this cause, please contact:
Joe Wamback
Chair, Canadian Crime Victim Foundation